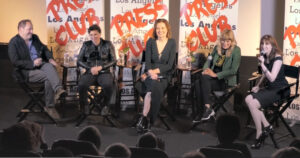 Devra Māza moderated a post-screening panel discussion of the documentary This Changes Everything at The Los Angeles Press Club on July 25, 2019. Panelists, including the film’s director, Tom Donahue, actor/executive producer Geena Davis, and featured writer/directors Catherine Hardwicke and Kimberly Peirce, joined Devra in a lively discussion of the documentary’s courageous exploration of the pervasive gender inequality and systemic sexism faced by women in the film and TV industry, both in front of and behind the camera. The event, which included a pre-screening red carpet and cocktail hour, was co-produced by Devra Māza and Diana Ljungaeus, executive director of The Los Angeles Press Club, in conjunction with Good Deeds Entertainment, and received widespread media coverage.

Watch the video of the full panel discussion above, or go here.

To see the official trailer for the film, go here.

For more about the film, and this exclusive event, go here.